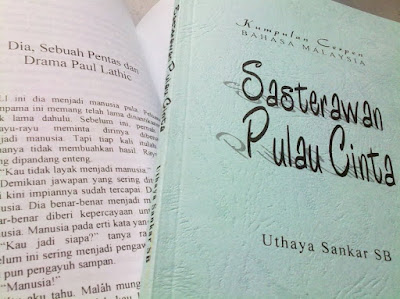 BACK in the 90s, Uthaya Sankar SB had a reputation as one of our most precocious literary talents. The person who kept reminding us of this talent was none other than Uthaya Sankar SB. His healthy self-regard was something to behold. The introduction to this story collection has him singing the praises of his skills not only as writer but researcher, editor and critic. But there is a wink somewhere behind it, I think.

My favourite story of his is still "Yang Aneh-Aneh" (1996), a surrealistic odyssey of detachable body parts and rampant corruption. Its fleet-footed pace, successful shifts in register, and cool ironic distancing make this something of a masterpiece. If we ever had a local Haruki Murakami, he would write something like this.

But for today, let’s talk about another fine story, "Datuk Datang ke Kampung Kami" (The Datuk Has Come to Our Village). This delightfully satirical tale takes place during the course of one afternoon in Siru Kambam, a fictional domain in which many of Uthaya’s stories take place, inspired by RK Narayan’s Malgudi. (Narayan is in fact one of Uthaya’s two favourite writers. The other is John Grisham).

The narrator is a young wannabe Malaysian writer of Indian descent. Could it be a projection of Uthaya as a child?

Well, at least he had the decency to put himself second.

You will notice that “Bahasa Malaysia” is capitalised. It’s not just here but in the whole book. This has to do with a tiff Uthaya had with his then-publisher Dewan Bahasa dan Pustaka (DBP), who insisted on the term “Bahasa Melayu”, a term he finds parochial and insulting. So he decided to just publish his own books, a principled stand that must have lost him some money over the years.
.
[Click HERE to read more about the Bahasa Malaysia controversy.]

Back to the story. Although the area of Siru Kambam is fictional, the political and ethnic dynamics at play are totally familiar. A literary talk is about to be given by a prominent Malaysian Indian writer to a Tamil community.

The talk is to be officiated by a nameless Datuk from the fictional Pertubuhan Politik India (PPI). In order to cheekily deflect speculation that this party represents the MIC, the narrator states that the PPI is still awaiting permission to join the Barisan Nasional.

This Datuk is supposed to officiate the event and then give way to the writer. But what happens is that not only is the Datuk 45 minutes late, he proceeds to hog almost all the allocated time.. 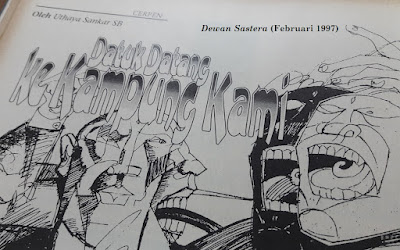 This gradual build-up of the Datuk’s verbosity and the narrator’s increasing exasperation is the comic highlight of this story, like something out of Mark Twain. The Datuk gives his own half-baked theories on life, literature, and everything, punctuated by loud applause from the sycophantic audience. The narrator is embarrassed that his favourite writer has to endure this, while the latter seems resigned: he’s probably been around long enough to have expected nothing else.

What’s interesting to me is that just calling the person “Datuk” is enough of a shorthand for pomposity and unreliability. This was written in 1997, way before there was an engineered worry about the proliferation of people given this title. Although Datukships given by the federal government are limited to about 200 living locals at any time, States are free to dish them out to anyone. The Sultan of Pahang in 2004 gave out 92 such titles. There are probably thousands of them roaming around by now. In fact, you’re probably one too.

Of course, a title like Datuk is a remnant of feudalism. There are other hereditary titles such as Syed, which was once the preserve of people who claim to have directly descended from the Prophet of Islam; this belief has quietly been shelved, I think because a few years back, rather freakily, there was a spate of convicted child molesters who all bore the name. That’s when we started acknowledging that parents just sometimes named their kids Syed for the fun of it.

There are calls by Certain Quarters to limit the number of Datukships and the like. I suppose I am in the radical fringe who believe they are not needed at all. If a person has contributed to society in some way, surely society will know about it somehow.

Even if society remains clueless about these great deeds, so what? The person can just live in the knowledge that he has done his bit. Plus, it’ll stop him from being too conceited.

What about all those other Datuks regularly hauled up on CBT charges and worse? Who are these blokes, and why are we obliged to address them first in whatever speeches we give?

Reading classical texts with the endless titles and salutations is quite a joy, I have to admit. But certain things don’t square well with the modern age. There have been several instances recently of Sultans stripping convicted criminals of their Datukships. But unlike in Britain, I have yet to hear of anyone here refusing a title. Perhaps it would take someone as principled as Uthaya.

This refusal may not necessarily denote modesty (as in “I’m not worthy of this honour”), but the opposite: A Marxist (as in Groucho Marx) refusal to be part of a club that accepts so many other, lesser, beings.