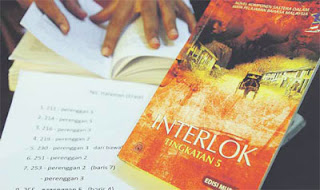 KUALA LUMPUR: The government has initiated cost-cutting measures to amend certain words and phrases in the Interlok textbook.

Deputy Education Minister Datuk Dr Mohd Puad Zarkashi said the process was being done manually by teachers instead of reprinting the book.

He said only nine pages in the book were affected and it would not be a burden on the teachers.

The books were recalled from the students last week to allow for the amendments to be made.

Puad said adhesive cut-outs, supplied by the ministry to the schools, were being used to make the amendments.

“The amendments are made to the words and phrases that have been identified. It is easier this way.

“Reprinting the book will incur wastage as we are not changing the whole book, only the parts affected.”

The New Straits Times was made aware of this when a reader called to say that teachers were required to make amendments to the textbook manually.

She said last Saturday, a school had recalled several of its teachers to carry out the task.

Puad said it should not be too much for the teachers to handle, adding that it was part of a teacher’s responsibility and did not require hard labour.

“There are usually five classes of fifth formers in a school. This totals about 200 to 250 books.” Puad also said representatives from the textbook division would be monitoring the amendments to be made.

Among the words and phrases replaced are “kasta pariah” (pariah caste) with “golongan yang sama” (the same group) and “tuhan” (god) replaced with “dewa” (deity).

National Union of the Teaching Profession president Hashim Adnan said it should not be a problem for teachers because it was their responsibility.

“If teachers don’t do it, who else will? The books have already been sent out to the schools. Logistic costs will be higher if the books are sent back to the publishers.”

However, National Parent-Teacher Association president Datuk Mohd Ali Hassan said it was a hassle because teachers had to devote extra time for the job when they should be doing other academic-related work.

“It should be done by the publisher and not the teachers.

“On the whole, it will be better if the book is reprinted as it is a national literature book.”

Parent Action Group for Education chairman Datin Noor Azimah Abdul Rahim concurred and said the job was not within a teacher’s scope of duties.