Who Stole the Moon? 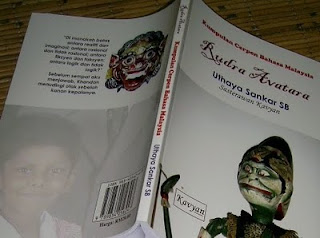 Just as politics is too important to be left to politicians, the Malay language too should stop being identified as the preserve of Malays. that’s the only way for the language to grow.
.
And it’s embarrassing that some citizens still get ‘complimented’ on their national language skills when we all should know better.
.

Uthaya Sankar SB can tell you all about it. He has been one of our most prolific and consistent creative writers for over a decade. In fact, his story Yang Aneh-Aneh (1997) remains one of the best things I have ever read: a twitchy, surrealistic odyssey of detachable body parts and pollution scandals. this book is his third for this decade and like the other two, it is selfpublished.

There are even four pictures of the author in case you want to see how he looks like.

Uthaya is enough of a name to be published by an august body like Dewan Bahasa dan Pustaka (DBP) but, you see, there was a bit of a tiff.

He is a strong advocate of the term Bahasa Malaysia and was appalled when DBP changed all instances of it, in a manuscript he submitted in the 1990s, to Bahasa Melayu. He thinks that the decision to revert back to Bahasa Melayu (when Anwar Ibrahim was Education Minister) is ethnocentric.

And so he doesn’t want his books to be published by anyone that insists on that term.

(Although I can’t help noticing that National Laureate A. Samad Said, that crafty old fellow, here uses the term ‘bahasa tanah air’ (language of the land) in his handwritten introduction, and so sidesteps the controversy altogether).

The title story [Rudra Avatara] speaks of reincarnation and Hanuman.

It’s amazing to read about Hindu beliefs and iconography – narrated, as it were, from the inside – in the national language. It makes you realise how free of iconoclasm, and therefore how neutered and ‘circumcised’, the language has been over the decades.

If Uthaya were merely a spokesman for his race, this would not make him an interesting writer. What counts for more: His supple and surprising uses of plot and perspective, his sense of irony and the absurd, his occasionally breathtaking endings. All the stories have been published earlier, but they have been carefully selected, because several of them have ‘doubles’ or ‘sequels’ in the same volume.

The stories tend to be in the first person, and often addressed to a second (kau). the dynamic between these two characters often provides a kind of tension; it can veer from the vindictive to placatory.

Although he has won the requisite sastera (literary) awards, Uthaya has an almost pot-boiler sense of pace and momentum; not surprising when you consider John Grisham is one of his favourite writers.

Another favourite would be RK Narayan, and, like him, Uthaya creates fictional locales (Siru Kambam rather than Malgudi) peopled with lightly eccentric and talkative folks. It’s a fictional world that keeps playfully replicating and commenting on itself, as when a character visits the place after reading a book called Unknown Facts about Little Known Siru Kamban.

Fail Merah: Konspirasi Membunuh Sasterawan Pulau Cinta is a lightly fictionalised work in which uthaya takes on the people who want to kena (sabotage) him over the whole Bahasa Malaysia issue. Abrasive and self-aggrandising, this succeeds if you treat it like a parody of a paranoid thriller, right down to its twist ending. Otherwise it falls victim to the unfortunate tendency of much local fiction to preach too much.

When the satire is applied with a lighter touch, as in the reformasi-era Cat, the results linger longer.

The ambitious cat aside, the most memorable character here is the boy [in Air] who wants to get into The Malaysia Book of Records by staying underwater for 22 hours.

The best piece might be the very last one, which asks a simple question: What happened to the moon? It has somehow disappeared!

A wondrous family tale with striking imagery (I can see the movie right now!) Cerita Paurnami achieves homespun magic. A satisfying way to end a collection that’s already more than some of its parts.