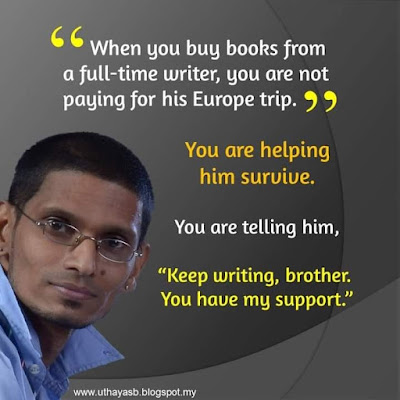 
“I greatly admire Malaysian writers like Uthaya Sankar SB and Gina Yap Lai Yoong who write in BM; they are able to express themselves in a way that isn’t available to me.” – Sharmilla Ganesan, The Star, 4 September 2016


“Uthaya Sankar SB is a novelist and activist actively writing and campaigning for religious freedom and social justice in Malaysia.” – Article 19 (24 January 2014)

“Uthaya is truly one of the rare few who lovingly treats Bahasa Malaysia as his mother tongue. It is hard to come by such talented Malaysian writers. Uthaya is one of them without a doubt,” says Sukhbir Cheema @ Cassius Ribhkus, the co-editor of Eksentrika, a content website dedicated to inspire, showcase and promote creative talents in Malaysia.

[Please CLICK HERE to read some of the articles in English]


Between 1996 and 2009, he was also attached to Radio Televisyen Malaysia (RTM) as Bahasa Malaysia news editor, newscaster, newspaper reviewer and coordinator of the RTM Disaster Unit. He was also appointed news content editor at Bernama Radio24 in 2008.


Uthaya was also awarded Ambassador for Peace by the Universal Peace Federation in 2008 for his contribution towards peace, understanding and unity through writing. He was also appointed in the Special Panel to ammend Interlok (Student Edition) in 2011.


Uthaya is the founder president of Kumpulan Sasterawan Kavyan (Kavyan Writers’ Group) since August 1999. Kavyan set a record in The Malaysia Book of Records in 2003 through Baca Cerpen Kavyan, a non-stop Bahasa Malaysia short story recital for 96 hours and 32 minutes. Kavyan was also awarded Anugerah Budayawan Selangor in 2005.


He blogs at www.uthayasb.blogspot.my on a regular basis; mostly in Bahasa Malaysia. Uthaya is also a columnist in Free Malaysia Today, The Malaysian Insider, Projek Dialog and The Malay Mail Online news portals.


Dipika Mukherjee, the author of Thunder Demons (2011) commented on Facebook (11 November 2011): “Uthaya is a writer and social commentator in Malaysia. Worth reading (his blog) for Malaysian issues.”
Diarkibkan oleh Uthaya Sankar SB pada 08:48