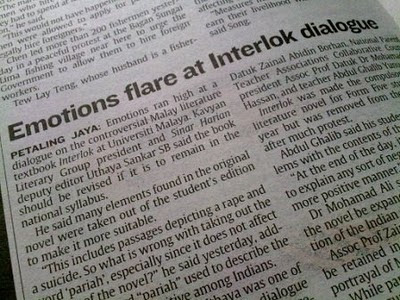 PETALING JAYA: Emotions ran high at a dialogue on the controversial Malay literature textbook Interlok at Universiti Malaya. Kavyan Literary Group president, Uthaya Sankar SB said the book should be revised if it is to remain in the national syllabus.
.

He said many elements found in the original novel were taken out of the student’s edition to make it more suitable.

“This includes passages depicting a rape and a suicide. So what is wrong with taking out the word ‘pariah’, especially since it does not affect the plot of the novel?” he said yesterday, adding that the word “pariah” used to describe the caste system was sensitive among Indians.

Interlok was made the compulsory Malay literature novel for Form Five students this year but was removed from the curriculum after much protest.

Abdul Ghalib said his students had no problems with the contents of the novel.

“At the end of the day, it is the teacher’s job to explain any sort of negative information in a more positive manner,” he said.

Dr Mohamad Ali suggested the glossary of the novel be expanded to include an explanation of the Indian caste system.

Assoc Prof Zainal Abidin said Interlok should be retained in the education syllabus for its portrayal of Malaysia before Independence.

While panellists for the most part presented their arguments rationally, the tension in the room was palpable.