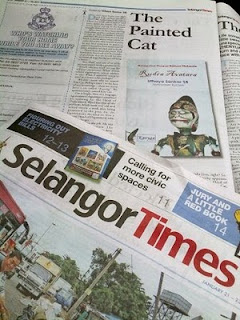 Since then, we have been moving from place to place without a house to stay. This situation is better, said Dad. We don’t have to crack our heads to think about what colour to paint the walls, what brand of paint to use, hire someone to paint or paint it ourselves, how many cans of paint would be needed and so forth.

That is only about the paint. Dad listed tens of – hundreds and thousands, indeed – problems that we would be able to avoid all together since we do not own a house.
“But, Dad,” said one of us while we were seated inside a peanut shell. “Which address shall we use for official purposes? What about school registration; which address to use? What if someone wants to send us a letter; a fan perhaps.”
“Just give the Parliament address or our Prime Minister’s,” Dad answered spontaneously. “At least we won’t be receiving all those junk mail.”
* * *
We don’t know why we named him Cat. Perhaps since – to the best of our knowledge – there has never been a cat called “Kucing”, we spontaneously named him Cat.
Cat is bright. Not very long ago, a government department advertised an opening for the Head of Department. Words are that all the previous heads were too old and retired merely a week after being promoted to the post. So, the Government decided to hire a younger Head of Department who would last longer.
Cat applied for the job. He was called for an interview. The interviewer had no reason to deny Cat’s right to apply for the advertised position. Cat seems to fulfil each and every requirement and qualification to be the head of a government department. Indeed that was the reason why, says Cat, the Public Services Commission called him for an interview.
“We are looking for a candidate who is fluent in more than two foreign languages,” said the interviewer while using a pen to circle the requirement which was indeed clearly stated in the newspaper advertisement.

One day, we caught Cat and dumped him inside a glass container. Then, we baught a can of paint. We are not sure of the colour. We don’t even recall the brand. But words are that the paint which we bought has a five-year guarantee. If used somewhat after a general election, the paint is assured to last until the next general election, five years later.

Thus, we poured the paint into the glass container containing Cat. We let Cat soak in the paint for a few hours. Later we took him out. Of course Cat has changed colour according to the colour of the paint.

Cat told us that he was actually dead. But he was still alive, he said, because cats have nine lives.

“Miew-miew-miew,” said Cat. Meaning: Take me to the government department which rejected my application to become the Head of Department.

“What for?” asked someone among us.

Cat demanded for a second interview. Throughout the interview, Cat said absolutely nothing. Not even miew-miew-miew. Ten questions asked, zero answered. Hundred questions, none answered.

Cat is bright. Cat has also made it possible for us to buy a residence by means of his salary as the head of a government department. Cat is often refered to as the most potential candidate to become the nation’s prominent leader. But the fact still remains that Cat is a cat which was once dumped into a glass container and soaked in paint – God knows what colour! – that is guaranteed to last five years only.

Dad came home one night and woke us from our sleep. We rushed out of the house. Then, we took out a match and burnt down the house. The whole family stood staring as the flames brought down Cat to ashes.