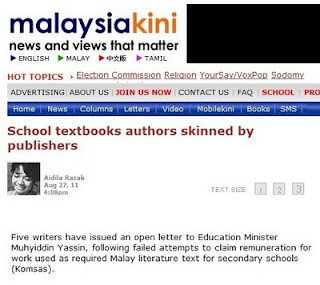 According to the letter, made available to the media by novelist Uthaya Sankar SB, the five writers have “not received a single sen” in royalties, despite their work now being used by thousands of students nationwide.

“We have been given the run-around by the parties involved and feel exploited for the sake of profits,” they said.

Government body Dewan Bahasa dan Pustaka (DBP), too, has failed to pay royalties and even published Erda's short story “Israk” as part of a compulsory secondary school textbook without consultation.

“The writer was never contacted by the publisher or the Textbook Department of the Ministry of Education to inform or seek the writer’s permission to use the work,” the letter read of the short story which was first published in DBP-published magazine, Dewan Siswa in 2010.

For Rohani, who wrote the short story “Warkah Daripada Ibu” which since 2010 has been part of the form two Komsas syllabus, publisher Mega Setia Emas Sdn Bhd refused to pay royalty, claiming the rights belong to them.

They claim that this is because Rohani had forfeited her rights when she allowed them to publish her work in 2001.

The same fate befell her novel Cempaka Putih Untukmu, which was also put out by the same publisher that year.

The novel is now part of form three Komsas syllabus for Johor, Sabah, Sarawak and Labuan, but is published by Nur-Ilmu Sdn Bhd. Both publishers have refused to pay royalty.

Amy Suzani has similarly been refused royalty, despite her short story ironically being made the title story for the anthology which was included in the Komsas syllabus in 2010.

Hazama was perhaps ‘luckier than others, as she was given a “small compensation” by publisher Karya Hartamas Enterprise for her novel Di Dini Bukan Duniaku, which is now part of the form one Komsas syllabus for Kelantan, Pahang, Terengganu and Malacca.

“Unfortunately, she was given a small compensation but asked to sign a receipt which states that she had received five times the amount of that compensation.

“She was also refused a copy of the receipt when asked,” the letter said of the novel first published by Associated Education Distributors (M) Sdn Bhd in 2006.

The novel was re-published with an alternative title, Hikmah, by V-Nice Resources to be used as part of form 1 Komsas syllabus for the Perak, Perlis, Kedah and Penang.

“Associated Education Distributors told the writer to seek royalties from V-Nice Resources but the latter said it had made the payment to the former,” it read.

The writers note that other publishers have been duly compensated writers whose works have been used for the widely distributed Komsas books.

“Sasbadi Sdn Bhd had made its first royalty payment on Aug 25 to Timah Baba for her son, Hizairi Othman’s work which is included in the Gema Sepi Gadis Genius anthology published by DPB in 2010, which is now part of the form two Komsas syllabus,” they wrote.

This differs far from the attitude of Nur-Ilmu, who Uthaya said completely disregarded the writers’ claims when contacted by him on Aug 15.

“We don't care. You can send whatever letter. We have our lawyers. The writer had sold the manuscript to us, so it belongs to us,” publishing manager, Julie Looi was quoted as saying in Uthaya’s column in Free Malaysia Today on Aug 22.

Besides these five writers, other novelists and poets have decried having royalties withheld from publishers including DBP, including national laureate A Samad Said.

(Reported by Aidila Razak in Malaysiakini on 27 August 2011. Republished in Inside Sarawak on 28 August 2011)