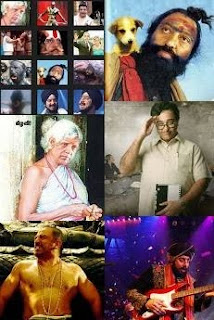 Some guys have claimed they haven't understood chaos theory which plays such an important part in the film. As a physics student, I've decided to explain it a bit so that people can appreciate the brilliance of the film.
.
What is Chaos?
Basically a chaotic system is one wherein long term predictions are impossible. Like for example, if I push a car, I know that it is going to move and it will continue to do so if I go on pushing it on and on. However, in a chaotic system, this situation cannot be predicted over a long period of time. Weather, for example, is a chaotic system. No matter how good your instruments are, you simply cannot predict the weather with 100 per cent accuracy over a long term basis and forecast it.
.
What is the Butterfly Effect?
It is the most important component of a chaotic system. Basically, small perturbations results in amplifications which completely destroys the original nature of the system and makes prediction impossible. If a butterfly flaps its wings in Africa, it could result in a cyclone in USA. (Mark the word COULD.) A highly dumbed down explanation of the butterfly effect is in the film Anniyan, where Vikram's sister dies because a liquor shop owner sells liquor on a dry day.
.
OK, how does Dasa incorporate it?
.
In essence, Dasa talks about eight characters who are inconsequential as such, but are integrated in a larger picture. Without Bush, the plane would have been called back. Without Shinghen, Govind would be dead. Without the tsunami, the world would have been destroyed. Even Krishnaveni (the old woman) plays a very important role. If she had not put the vial in the idol, maybe Govind would have recovered it then and there and a powerful weapon would have been unleashed. The very fact that it went into the idol meant that it was being accelerated to its destiny. Without Kaifulllah Khan, Govind would have never escaped... the list simply goes on.
.
OK, so does the film talk about theism or atheism?
.
Neither. It talks about how humans drive the destiny of the world.
.
The idol that is drowned in the sea along with Rangarajan in 12th century by Chozha king results in a fault being developed at the bottom of the ocean and creates tremors more than 800 years later. These tremors result in the Tsunami. This again is a classic case of Butterfly Effect wherein a seemingly inconsequential event (the drowning of the idol) saves Tamil Nadu from being wiped off the face of the earth.
.
Now tell me, does THIS movie lack a story? This movie has the most beautiful story ever attempted in Indian cinema. Unfortunately, Indian viewers and critics are obsessed with the "boy meets girl" and "revenge" themes, so they fail to see the story in this master piece.
.
AN INTERESTING THEORY ON DASAVATHARAM ROLES
.
If you knew the real dasavatharams of Lord Vishnu and their characters you can appreciate the script more. Let me explain, starting with the best adapted role:
.

Lord krishna is actually a dalit, he is dark-skinned [shyamalam]. He saved draupadi when she was being violated and he was the actual diplomat in mahabharatham. Lord krishna dies of an arrow striking his lower leg. Now look at how vincent was introduced.. he appears when asin is about to be molested and he saves her like draupadi. Vincent is the dalit diplomat, fights for land issue [soil issue to be exact] and dies from the metal rod striking his leg. Oh even five of vincent's men are drugged at P. Vasu's.. sounds familiar???
.

This is an easy given. as the name suggests and the role personifies you can easily get it.
.
3. Mathsya avatar - Ranagaraja nambi
nambi is thrown into water in an act of trying to save lord from being thrown into sea, though vainly. what more clue do you want? Lord VISHNU in this manner saved his True Devotees from dissolution so as to hand down divine knowledge and saved the VEDAS from destruction so as ensure CREATION after the DISSOLUTION. here Ranagaraja nambi tried to save Vishnu and they believe he had...
.
4. Varaha avatar - Krishnaveni paatti
During the mukunda song, krishnaveni paatti does varaha avatar in the shadow puppetry. The frame freezes on it for a second. there is the clue. Moreover, in varaha avatar lord actually hides earth so as to protect life forms. Here too krishnaveni hides the germs - life form inside the statue so as to protect.
.
5. Vamana avatar - Kalifulla khan
remember in vamana avatar, lord vishnu takes the vishvaroopa, that is the giant form! Hence the giant kalifulla here symbolises vamana avatar.
.

Parasurama is actually on an angry killing spree and killed 21 generations of the particular kshatriya vamsa. Hence the real KILLER... Guess what: that’s what our Fletcher is! He comes around with the gun [modern upgrade for axe] and kills everyone around. I have to check if he kills 21 people though.
.
7. Narasimha avatar - Shingen Narahashi
first of all the name itself is a play on the words singam [means lion in tamil] and narasimha [the avatar being symbolised]. Lord Narasimha manifests himelf to kill the bad guy and he also teaches prahaladha. In the movie, he shows up to kill the killer fletcher! and is also a teacher.. Lord Narasimha had to kill the asura with bare hands and hence the martial arts exponent here.. get it?
.

Lord Rama stands for the one man one woman maxim, kind of symbolising true love.. Here Avatar portrays that spirit by saying that he loves his woman more than anything and wants to live for her.
.
9. Kalki avatar - Govindaraj Ramasamy
As you know, the hero in kaliyug can be none other than the Kalki avatar!!!
.

This is the most loose adaptation I couldn't clearly comprehend. But if you look at the real koorma avatar, the lord is the turtle/tortoise that helps in stirring the ksheera sagara and bringing out the amruth. This essentially creates war among the devas and asuras. Similarly today Bush facilitates war between (you know whom)... May be Kamal also indicates that this avatar is a bit dumb like the tortoise ...
.

Note: This mail was forwarded by a friend. It originally came from this e-mail – rmogana@localbasic.com.my. My thanks to that person. – Uthaya Sankar SB