“Elegant” Silence Is Not An Option 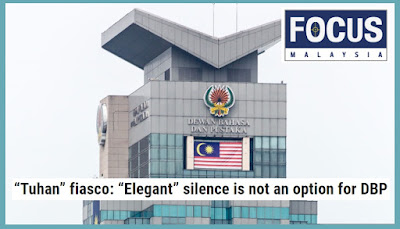 It has been almost a month since the expose on how Dewan Bahasa dan Pustaka (DBP) has cunningly changed “Tuhan” to “tuhan” in stories written by non-Muslim writers in the Meredah Kabus (2021) anthology became public knowledge.

The writers concerned have confirmed that they originally used “Tuhan” with a capital T and were totally not aware when and why DBP changed it to “tuhan” without neither their knowledge nor consent.

After this issue was highlighted in Focus Malaysia (17 April 2021), DBP’s director general claimed that he was oblivious of such matter.

“As far as I know, DBP made no such ruling to differentiate between ‘Tuhan’ and ‘tuhan’,” Datuk Abang Salehuddin Abg Shokeran told Focus Malaysia (19 April 2021).

But his stand changed drastically the next day when he made a statement to defend DBP’s decision to use “tuhan” for non-Muslim writers.

In his statement, as reported by Focus Malaysia (20 April 2021), Salehuddin quoted the Oxford Dictionary of English, Collins English Dictionary and Wikipedia (yes, you read that right) to defend DBP’s decision to make a distintion between “Tuhan” and “tuhan”.

The statement contradicted itself when the director general also referred to the Pedoman Umum Ejaan Bahasa Malaysia (1975) which actually states that capital letters should be used to refer to religious matters, holy books, God’s name and its pronouns.

Following DBP’s statement that “Tuhan” can only be used by Muslims to refer to Allah, questions also arose from the public about the word “Tuhan” in the Rukun Negara and the national anthem “Negaraku”.

DBP’s silence since then has not made things better. Questions are being raised in various Bahasa Malaysia, English, Tamil, and Mandarin media but the national language authority still remains mum.

It is obvious that DBP had blundered big time. When the officers cunningly changed “Tuhan” to “tuhan” in Meredah Kabus, they must have thought nobody would notice and none would dare to question their authority. Therefore, the little Napoleons needed no reason or explanation to continue doing what they have been slyly doing for the past two decades.

I strongly believe that DBP has been changing “Tuhan” to “tuhan” consciously to undermine non-Muslims in Malaysia. It’s sad to see DBP slowly but surely leaving behind its actual role as a language and literature body, turning into a fascist organisation.

Obviously, when the alarm was raised last month, DBP could not explain what was actually happening. The director general himself seem to be in the dark about what the little Napoleons are doing behind his back.

To make matters worse, he made a flip-flop statement to defend their decision in making a distinction between “Tuhan” for the Muslims and “tuhan” for the non-Muslims.

People are still waiting for a rational explanation since Bahasa Malaysia belongs to every Malaysian. There are many questions begging for answers but having run out of ammunition from day one, DBP has been laying low for nearly a month.

Maybe they are silently praying and hoping that people would forget everything that has happened.

Perhaps everyone in DBP has been busy preparing for Hari Raya Puasa. Now that the fasting month is over and we have celebrated the festivals, we look forward to DBP getting back to prepare a new press statement.

Of course the latest statement should address not only the “Tuhan/tuhan” issue in Meredah Kabus anthology, Kamus Dewan and Kamus Dewan Perdana, but also the “Tuhan” in Negaraku and Rukun Negara.

If the new press statement also sounds more like a memo from a fascist organisation that cares nothing about the sensitivity and the constitutional rights of the non-Muslims, we should perhaps be prepared to boycott anything published by DBP.