Interlok: ‘What does MIC want?’ 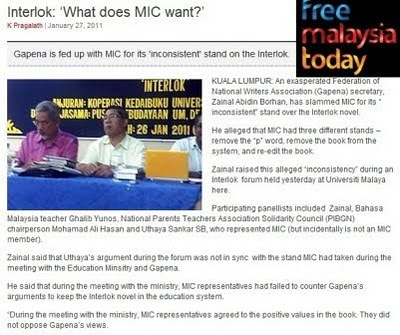 He alleged that MIC had three different stands – remove the “p” word, remove the book from the system, and re-edit the book.

Zainal said that Uthaya’s argument during the forum was not in sync with the stand MIC had taken during the meeting with the Education Minsitry and Gapena.

He said that during the meeting with the ministry, MIC representatives had failed to counter Gapena’s arguments to keep the Interlok novel in the education system.

“During the meeting with the ministry, MIC representatives agreed to the positive values in the book. They did not oppose Gapena’s views.

“So why oppose the book now if you cannot even counter arguments (put forward by Gapena) during the meeting?” he asked.

Zainal also chided the Indian community for harping on the issue of the alphabet “p”’ (as in “pariah”) .

“You are the ones to be blamed… You are the ones making it an issue over a small letter. We (Malays) have glorified and purified the word (pariah) by using a capital P for the term.

“In essence ‘pariah’ means impure and polluted. They (the Indian characters in the book) changed to pure when they came to Malaya,” he said.

Meanwhile, Uthaya, who chose not to lock horns with Zainal, raised instead some of the factual errors in the Interlok book.

“There are factual errors in the book and this will give rise to problems as those who read Interlok are not only students but also their family members,” he said, referring to Ghalib’s stand that Interlok was “the perfect choice” and that there were 10 values contained in the meant-for-school edited version.

Describing students as a “mature lot”, Ghalid said the early distribution of the books in October 2010 had “allowed them to read it on their own”.

“There is no issue among the students… even the teachers are well prepared to teach.

“It is us (the adults) who are making it an issue,” he said.

Uthaya, however, was of the opinion that Ghalib was overlooking the “core issue”.

“This is not a means to an end … you can’t justify derogatory words and phrases. If this be the case, then who cares if an individual humiliates another using the ‘P’ word?

“And if that is the case, then one can also use the ‘F’ word liberally,” he argued; refering to one Kok Seong’s opinion.