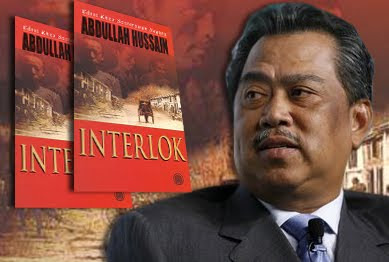 : The government has decided to maintain the Interlok novel in classrooms with amendments, falling short of MIC’s demand that the book be completely withdrawn.
.

Deputy Prime Minister Muhyiddin Yassin, who is also education minister, said an independent panel would be set up to study the types of amendments to be made and would submit recommendations to the government.

“The decision to continue using the novel, with amendments so as not to hurt the feelings of the Indian community, is the best solution,” he added in a statement.

On Jan 23, MIC president G Palanivel said that MIC would stick by its panelists’ decision to seek for a withdrawal of the book as it went against Prime Minister Najib Tun Razak’s 1Malaysia slogan.

Pressing for a firm decision on the matter, he said: “Putting additional footnotes, glossaries and guidelines is not going to help resolve the matter.”

However, Muhyiddin revealed that the consensus to resolve the issue was reached after he, together with Palanivel and MIC deputy president met Prime Minister Najib Tun Razak to discuss the matter this morning.

He also met Palanivel and Subramaniam over the issue yesterday.

In the Barisan Nasional spirit of consensus, he said, they agreed that the novel would continue to be used as a textbook for the literature component of Bahasa Malaysia for Form Five in Zone 2, namely Kuala Lumpur, Putrajaya, Selangor and Negeri Sembilan.

The amendments to the book would be made, taking into consideration the views of MIC, he said.

Muhyiddin also said that the panel to decide on the amendments would comprise linguists, academicians, literary figures and representatives of Dewan Bahasa dan Pustaka (DBP) as well as the Indian community.

“I expect the amendments to be carried out in the near future,” he said, adding that the novel would only be used and distributed to schools once the amendments had been incorporated.

While waiting for the process to be completed, he said, the Education Ministry would instruct teachers to continue with the existing syllabus so as not to disrupt the teaching and learning process.

“I believe we have sufficient time to make a thorough amendment so that there will be no more disputes over Interlok,” he was quoted as saying by Bernama.

The novel, by national laureate Abdullah Hussein, became controversial following the ministry’s decision to use the novel as a literature textbook, with several parties claiming that it contained words deemed sensitive to the Indian community.

Muhyiddin said the decision to retain the book was made after taking into consideration the views of all parties, which acknowledged that the book was good in nurturing and strengthening unity among the multi-racial and multi-religious society in .

At the same time, he said that any amendment made to the novel would not affect the storyline and the noble message which the writer wanted to convey.

On Tuesday, Subramaniam, who is also human resources minister, refuted rumours that he had compromised on his stand, saying that he had repeatedly conveyed the Indian community’s wish to remove the book during the Cabinet meetings.

Contacted for comment today, he replied: “I will back the president’s statement on this matter.”

Political observers warned that the latest development could spell trouble for MIC as the opposition would accuse it of backpedalling on its earlier stand and bowing to pressure from UMNO.

The observers also pointed out that Barisan Nasional might lose some Indian votes in the coming Tenang by-election following the government’s decision today.

In a statement later, Palanivel recaped what had transpired yesterday but did not mention if the decision was welcomed by MIC, which had come under tremendous pressure to make a stand.

The MIC president said he and Subramaniam had briefed Najib and Muhyiddin on the matter yesterday.

“We briefed them on current developments and told them that the book should not be used in schools as it may hurt the feelings of Indian students and provoke negative thoughts among other students.

“The prime minister said yesterday that he would again meet us this morning in the presence of the deputy prime minister,” he said.

“This morning when they met us, the prime minister told us that they will put a panel to go through the book and remove all unsuitable remarks that hurt the feelings of Indians,” he added.

Palanivel said he and Subramaniam also told Najib that the book should not be used in classrooms while it was being reviewed.

The MIC president also wanted the independent panelists to have a careful look at what is being edited so that no further dispute arises.

MIC also urged the Education Ministry to consult the party’s panelists on the matter.