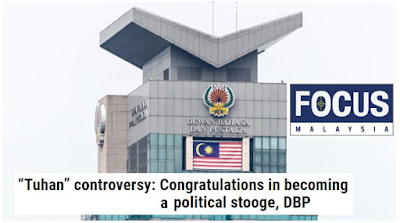 I AM utterly shocked to see that Dewan Bahasa dan Pustaka (DBP) too has fallen into the flip-flop attitude common to Malaysian politicians.

On April 19, its director general Datuk Abang Salehuddin Abg Shokeran claimed that he “was oblivious on the ‘Tuhan’ controversy” and “DBP made no such ruling to differentiate between ‘Tuhan’ and ‘tuhan’”.

Salehuddin also told FocusM that “the [DBP] officers involved may have gotten confused with the Oxford Dictionary”.

But on April 20, he shamelessly relied on the Oxford Dictionary of English, Collins English Dictionary and Wikipedia (yes! Wikipedia) to “defend its [DBP] decision to make a distinction between the words ‘Tuhan’ and ‘tuhan’”.

It is funny and ridiculous for DBP to refer to English dictionaries while in the same breath having the guts to say: “dictionaries are about compiling vocabularies of a specific language [Malay] and we record it based on its actual usage”.

So, “actual usage” for DBP means “Tuhan” can only be used for Allah, the Muslim god.

I challenge DBP to publish their official verdict in all mainstream media available in the country.

I also challenge DBP to make an official decree that “Tuhan” in Rukun Negara’s “Kepercayaan Kepada Tuhan” refers only and solely to Allah, the Muslim god. DBP must also make it clear that “Tuhan” is the Rukun Negara has never meant to be inclusive for all Malaysians of different faith.

Therefore, non-Muslims do not have to recite the Rukun Negara anymore. According to DBP’s “rule”, by proclaiming “Kepercayaan Kepada Tuhan” (Belief in God), a non-Muslim is actually reciting part of the “syahadah” – I Believe In Allah.

DBP claims to have made the decision based on its guideline, Pedoman Umum Bahasa Melayu (1975). But the guideline as quoted by Salehuddin does not in any way say that “Tuhan” can only be used for the Muslim god, Allah.

I strongly urge fellow Malaysians to not give in to such subversive action being made by DBP, which is supposed to make sure the national language belongs to all Malaysians.

Perhaps the Malay-Muslims can keep their ethnocentric Bahasa Melayu and all other Malaysians can officially use the inclusive Bahasa Malaysia.

[Uthaya Sankar SB is the founder of Kavyan Writers’ Group. This opinion piece was published in Focus Malaysia on 21 April 2021] 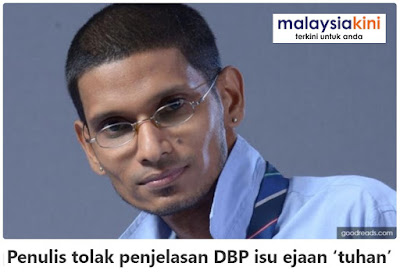