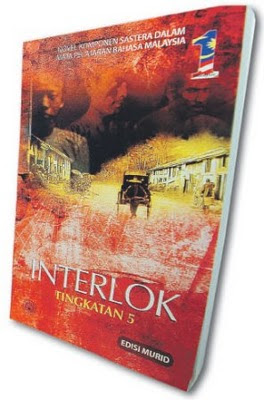 The Interlok debate has raised the key question of how books are selected as texts for the literature component of Bahasa Malaysia in schools. SUZIEANA UDA NAGU has the details in New Straits Times, 29 January 2011.
.

A BOOK — with memorable characters and a riveting plot — often stays indelibly imprinted on the readers’ minds long after they have finished the last chapter.

Malay novel Seteguh Karang by Tuan Faridah Syed Abdullah has that effect on advertising executive Amri Yusof who read it at age 16.

“I remember how the main character Awanis was forced to single-handedly care for her siblings at such a young age after her parents died,” says the 26-year-old.

Amri is among the first batch of secondary school students in Terengganu, Kelantan, Pahang and Malacca to study the novel in school as part of the literature component of Bahasa Malaysia (or Komsas) introduced nationwide a decade ago.

Komsas was mooted in 1999 to instil the reading habit in young Malaysians and promote a better appreciation of Malay literary works among them.

The idea is to expose schoolchildren of all ethnicities to Malay literature and hopefully a new cohort of literary enthusiasts and talents will emerge.

The local creative writing industry needs a revival and young Malaysians who have learned to express their creativity through the literature component taught in schools will be able to fill the gap.

Komsas was introduced in classrooms to first- and fourth-formers in 2001.

It is taught twice a week during Bahasa Malaysia period which lasts 40 minutes.

The heated debate over the choice of Datuk Abdullah Hussain’s novel Interlok as the text for the literature component of Bahasa Malaysia beginning this year [READ HERE] has raised the key question of how are books selected as texts for this particular subject?

Universiti Putra Malaysia Malay language department lecturer Associate Professor Dr Lim Swee Tin refutes the suggestion that Interlok had not been reviewed for its suitability as a Komsas text.

“Before the abridged version of Interlok was selected as required reading for fifth-formers this year, the novel had already been used in its entirety as a Malay Literature text by sixth-formers who sat for the Sijil Tinggi Persekolahan Malaysia examination between 1976 and 1985.

“It was used in schools for nine years with no objections,” he says.
Lim is one of the authors and academicians involved in the Komsas reading materials evaluation process in 2008.

Interlok is among more than 700 novels, poems, drama and traditional prose evaluated for secondary schoolchildren’s use that year.

Lim, who is also a poet and winner of the Southeast Asia Write award in 2000, maintains that all works of literature submitted to the Education Ministry’s Curriculum Development Centre for evaluation undergo strict procedures to determine their suitability.

“The ones that are taught in schools have met all the criteria,” says Lim.
If works of literature nourish the soul, it is then necessary to expose young readers to materials that can broaden their outlook and build their character.

Learning literature as a component of Bahasa Malaysia in school has certainly shaped Amri Yusof’s perception of life.

“Reading in class has given me the skills to be critical of what I read. It has also nurtured my passion for writing and made me a literary and art scene enthusiast,” says Amri.

THERE has been a mixed reaction to the decision to retain with amendments the abridged edition of Datuk Abdullah Hussain’s novel Interlok as a text for the literature component of the subject Bahasa Malaysia for fifth-formers.

Some academicians and literary enthusiasts reacted happily to the news while others voiced concern.

“The decision to continue using the novel with amendments so as not to hurt the feelings of the Indian community is the best solution,” says Muhyiddin, who is also Education Minister.

Muhyiddin added in a statement on Thursday that an independent panel would be set up to study the types of changes to be made to the abridged version of the novel.

The review body — comprising linguists, academicians, literary figures and representatives of Dewan Bahasa dan Pustaka as well as the Indian community — will then submit their recommendations to the Government. [MORE HERE]

“I support the Government’s move as I believe it is important to establish a middle ground for the sake of teachers and students. But the decision must not be at the expense of the aesthetic of the novel. The sanctity of the literary work must not be compromised.”

“I trust that the Government has made a sound decision. The move to retain and amend the book is perhaps the best solution to resolve the protracted dispute. However, it is crucial that the changes do not affect the storyline and its original message.”

“I respect the Prime Minister and Education Minister’s decision.
As a poet and recipient of the National Literary Award, I hope the author’s consent is taken into account before any amendments are done to his book.” [Her previous stand HERE]

“This is a win-win situation — a good midway point between those who wanted to keep the book as it is and those who want it withdrawn altogether. This decision is also timely; now all parties should move forward. I hope that there will not be any disputes during the amendment process. I am also happy that the book has been retained as students can learn from the positive values of the muhibbah spirit of the time.” [His previous stand also HERE]

QUALITY, artistic flair and suitability. These are among the criteria used to pick the best reading materials for the literature component of Bahasa Malaysia (or Komsas).

“This is to enable teachers to use a drama script, short story or poem as an educational tool that will shape the intellect and viewpoint of young Malaysians,” says Universiti Putra Malaysia Malay language department lecturer Associate Professor Dr Lim Swee Tin.

Lim is one of the authors and academicians involved in the Komsas reading materials evaluation process for in 2008.

The text chosen must contain good moral values — such as honesty, teamwork and tenacity — that young readers can apply to their daily lives.

It must also mirror the realities of life in Malaysia.

“It should get the message across to young people that being a part of a multicultural society requires understanding and respect for each other,” adds the poet and 2000 Southeast Asia Write Award winner.

To appeal to young readers, the material must also be “enjoyable to read”.

“It must have elements that will stimulate critical and creative thinking in students and written in a style that suits their age,” adds Lim.

Komsas was introduced in school as part of the literature component of Bahasa Malaysia (or Komsas) a decade ago.

It aims to instil the reading habit in young Malaysians and promote a better appreciation of Malay literary works among them.

The literature component was first taught in Form One and Four classes in 2001. It is conducted twice a week during Bahasa Malaysia period which lasts 40 minutes.

The search for Komsas textbooks for the 2011-2020 period began four years ago when Education Ministry’s Curriculum Development Centre (CDC) invited all registered publishers to submit suitable materials to be considered.

It is reported that CDC received more than 700 poems, drama, traditional prose and novels, written by national laureates, winners of prestigious book awards and aspiring writers.

CDC also formed three review bodies to filter out poor submissions. The first committee was responsible for picking the best text, whereas the second determined the number of text to be selected.

The second committee had reportedly met nine times over the course of a year.

The third panel, on the other hand, narrowed down the selection and submits a shortlist to CDC to make the final decision.

The CDC-approved reading material were published in 2009 and distributed to schools by the end of last year. – NST, 29 January 2011
Diarkibkan oleh Uthaya Sankar SB pada 09:00