Panel’s findings ‘out in a month’ 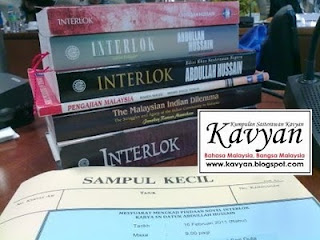 PUTRAJAYA: The independent panel set up to amend the controversial Interlok textbook will submit its recommendations to the Education Ministry in a month’s time, its chairman Professor Datuk Dr Shamsul Amri Baharuddin said yesterday.
.

He added that there would also be no “ill feelings” towards the author, national laureate Datuk Abdullah Hussain.

“We want to find clarity, especially in a multicultural society and this will be our guide in coming to a consensus,” he told reporters after a three-hour meeting here.

Shamsul said the panel had agreed to consider the author an important individual who must be respected and his integrity upheld.

“We have moved to another level. We don’t kill the writer because we don’t like the song.

“Don’t crucify the author as it is not right,” he said, adding that the author should not be seen as a problem as he was doing his best as one and it was within his right to do so.

Shamsul said the panel would not brief the Education Ministry until everything was “very clear”.

The panel was formed following protests from Indian community leaders who said it contained derogatory words and factual errors on geographical, sociological and historical issues. They also claimed it contained religious misinterpretations and cultural errors.

The MIC pressed the government to withdraw the book, but following meetings with Prime Minister Datuk Seri Najib Razak and his deputy Tan Sri Muhyiddin Yassin, it was decided that the novel would be retained.

However, amendments will be made to the text deemed offensive and factually wrong by the panel. Its use in schools was also suspended until the amendments were incorporated into the novel.

One of the main issues that drew protests from the Indian community was the use of the word “pariah”, in the novel.

Yesterday’s discussion, the first since the panel was announced, went “very well” according to Shamsul, with panellists grasping a better understanding of the issues.

Shamsul felt that the panel would come to a conclusion “very quickly” based on what took place yesterday combined with the muhibbah spirit of the meeting.

Opinions, he said were put “across the table” and that the discussions would not go further than two rounds.