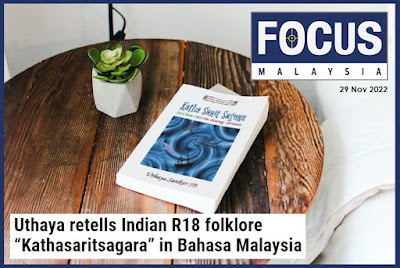 PROLIFIC and sometimes controversial local writer Uthaya Sankar SB who found himself at odds with the authorities for allegedly posting a Facebook status deemed insulting Prophet Muhammad in April 2022 — details here — has not allowed his awful experience to deter him from sharing the richness of Indian literature with local audience in Bahasa Malaysia.

Even following his detention by the police from Bukit Aman on 11 April 2022 and having to spend a night at the Dang Wangi lock-up, Uthaya has decided to work his way to retell the Kathasaritsagara by Somadeva which was originally written in Sanskrit to Bahasa Malaysia for matured audience.

The Kathasaritsagara was first translated into English by Charles Henry Tawney and published in two volumes as The Katha Sarit Sagara or Ocean of the Streams of Story (1880-1884).

It was further refined by Norman Mosley Penzer and published as The Ocean of Story (1924-1928) in ten volumes. There are also numerous translations and retellings in English and other regional languages in India.

When he was studying in the Universiti Malaya in 1993, Uthaya was mesmerised by The Ocean of Story which he spent weeks reading in the confinement of the library.

“The original text is very long and consists of 124 tarangas (chapters) written in 18 lambhakas (sections). I decided to concentrate on the first five lambhakas or the first 26 tarangas,” shared Uthaya who has been a prominent and controversial figure in the local literary scene since 1992.

Despite the objections from certain groups of Hindu and Tamil language fanatics who were dead set against the idea of sacred Hindu texts being published in Bahasa Malaysia, Uthaya’s retelling of the Bhagavad Gita in 2021 was a big hit among the multi-racial and multi-religious Malaysian community.

“The initial 1,000 copies were sold out within two weeks, and I had to reprint an additional 500 copies to cater for the demand,” revealed Uthaya who doesn’t shy away from thanking his haters for creating a buzz for his books.

While his “hina nabi” case is still being investigated under Section 298A of the Penal Code and Section 233 of the Multimedia and Communications Act, Uthaya said he continues to courageously speak his mind on various issues through his writings.

Nevertheless, he cautions the public that his latest book is not suitable for children since there are many mature elements in the stories. “Let this collection of Indian folklores be solely for the adults to enjoy,” he said cheekily.

Uthaya’s Katha Sarit Sagara is scheduled for release in January 2023 and can be purchased [here].