My Right To Use Bahasa Malaysia 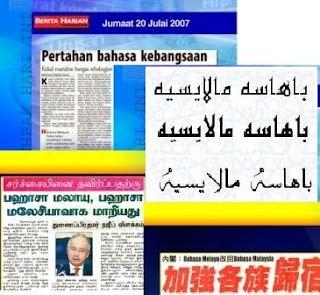 “You would take your rights for granted until someone tries to take it away from you.”
.

A good friend of mine, the late Khandan wrote those wordings in one of his cards to me years ago. I took his words for granted until recently when I faced the issue regarding Bahasa Malaysia.

.
It all started when I was proof-reading Seutas Rantai Loceng Suasa, a compilation of 15 Bahasa Malaysia short stories by six Malaysian Indian writers to be published by Dewan Bahasa dan Pustaka (DBP).
.
I descovered, to my surprise, that Azmi Ibrahim, the editor in charge had changed the term “Bahasa Malaysia” in the preface of the manuscript to “Bahasa Melayu”. I urged him to change it back to “Bahasa Malaysia” because that is the term I want to use in the preface that I as the compiler wrote.
.
Azmi told me that DBP had decided not to allow me use Bahasa Malaysia. Surprised, I asked for an explanation.
.
“Bahasa Malaysia is a term coined by the politicians for political reasons,” he said.
.
“Politicians?” I asked. “You mean those people in the Government?”
.
“Yes.”
.
Well if we still have the same government, why does DBP rule Bahasa Malaysia as being inappropriate?
.
“It all started when the politicians wanted to unite all Malaysians from the different races,” Azmi said and went on to lecture about how Malaysia was formed and also about the bloody May 13 incident. “And now it’s about time we use the term ‘Bahasa Melayu’ again.”
.
“You mean to say that a true 100 per cent unity has been achieved?” I asked, somewhat stupidly.
.
“No. Not at all. Even the Malays are not really united.”
.
“Well, then, this is all the more reason that I have the right to use ‘Bahasa Malaysia’ in the preface of Seutas Rantai Loceng Suasa,” I emphasised. “Am I not helping the government in its move to reach unity among all Malaysians?”
.
That was the point where the diplomatic talk came to an end. The editor's tone turned drastic, so to say.
.
“Why don't you just give in? Have the book published ... you get the money, other writers too get their money, my work load will be less. Don't be too stubborn. Or else we might blacklist you.”
.
Hey! This is not a matter of stubbornness, I told myself. This has got to do with my principle, my right to use the term “Bahasa Malaysia”. But Azmi kept saying that “Bahasa Malaysia” is political and therefore, incorrect. I really don’t know why he’s so much against our government’s decisions to use “Bahasa Malaysia” as a way to unite us all.
.
But I was not going to give up my right and my principle. Remember what Khandan told me once? It all made sense to me. I should not give up what I know is my right.
.
I have nothing against “Bahasa Melayu”. But I grew up with “Bahasa Malaysia”. I love “Bahasa Malaysia”. And when someone tells me that “Bahasa Malaysia” is incorrect, what am I suppose to do?
.
And I have nothing against DBP. It has published several of my books. DBP is more like my Big Daddy. But when Big Daddy tells me that I cannot use “Bahasa Malaysia” because Big Daddy thinks that it is a term coined by the government for mere political reason, I have to make it clear to Big Daddy that he is wrong.
.
“Bahasa Malaysia” is not political. “Bahasa Malaysia” makes me feel proud to be a Malaysian; to be speaking the language of my country.
.
Okay, the origin of Bahasa Malaysia is Bahasa Melayu. (Let’s not talk about the origin of Bahasa Melayu because that will lead us to something else.) But as I said, I have nothing against it. Indeed, I do use the term “Bahasa Melayu” in my stories, when necessary. “Datuk Datang ke Kampung Kami” (Dewan Sastera, February 1997), for example, has both the terms “Bahasa Melayu” and “Bahasa Malaysia” in it.
.
My argument is very simple and pragmatic: “Bahasa Malaysia” does exist and it is not an incorrect term, despite what Big Daddy says.
.
I have been using “Bahasa Malaysia” in my writings published by Big Daddy. Siru Kambam was published in 1996 and went through a second printing in 1997. Surat dari Madras was also published by Big Daddy in 1999.
.
Big Daddy never told me “Bahasa Malaysia” was incorrect when I used the term in both books. Indeed, I checked the agreement documents for Hanuman: Potret Diri, Siru Kambam and Surat dari Madras. Guess what? It says “Bahasa Karya: Bahasa Malaysia”.
.
If that sounds surprising, wait till you hear this: the agreement document for Seutas Rantai Loceng Suasa states “Bahasa Karya: BAHASA MALAYSIA”.
.
I don’t know why Azmi had to bring up the matter in the very first place. Or was he just following orders? From whom? I wouldn’t know because I have not received any black-and-white statement from Big Daddy. And whenever someone - either me or the Press - tries to get in touch with Azmi for details, he is never in. Or at least that is what we have been told.
.
The issue is in the newspapers. It’s in cyberspace. The Education Minister has made a statement that both terms can be used for all purposes. [READ HERE]
.
“In a multi-racial community, it is easier to accept ‘Bahasa Malaysia’ since it reflects that the language belongs to the different races too,” Datuk Seri Najib was reported saying in The Sun (21 October 1999).
.
But why is Big Daddy still keeping quiet? Isn’t Big Daddy suppose to say something?
.
As I said, I have nothing against “Bahasa Melayu” or Big Daddy. But if Big Daddy still tries to stop me from using “Bahasa Malaysia”, Big Daddy is actually going against the Government’s decision regarding usage of the term.
.
Let’s hope that at least now Big Daddy will start talking. Let’s hear what's actually bothering Big Daddy. [Take a look HERE]
.
(Uthaya Sankar SB, “My Right To Use Bahasa Malaysia,” New Straits Times, 3 November 1999)
Diarkibkan oleh Uthaya Sankar SB pada 14:27