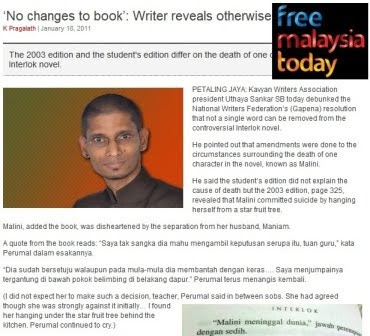 He pointed out that amendments were done to the circumstances surrounding the death of one character in the novel, known as Malini.

He said the student edition did not explain the cause of death but the 2003 edition, page 325, revealed that Malini committed suicide by hanging herself from a star fruit tree.

A quote from the book reads:

(“I did not expect her to make such a decision, teacher,” Perumal said in between sobs. “She had agreed though she was strongly against it initially… I found her hanging under the star fruit tree behind the kitchen.” Perumal continued to cry.)

The 2010 student edition, page 284, however posed an open question on how Malini died.

(Malini died, the woman said with sadness. Raman stopped walking. I did not expect that she would leave me, teacher, said Perumal in between sobs.)

In the student edition, Malini’s death was related to Raman by another character and confirmed by Perumal. The cause of death was not mentioned.

Interlok, the Form Five Malay literary component for Bahasa Malaysia, landed in the limelight after Deputy Minister in Prime Minister’s Department, T Murugiah called for the book to be removed.

Critics, including MIC, claimed that the book contained inaccurate information about the Indian community and used derogatory terms pertaining to caste.

However, Gapena supported the use of the book in schools.