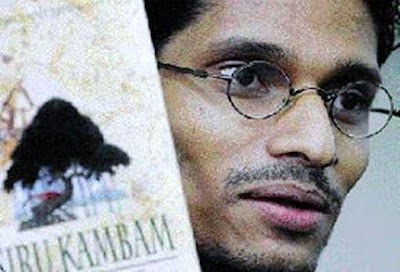 A Bahasa Malaysia news editor and newspaper reviewer with RTM, Uthaya Sankar SB also lectures at private colleges. He says nobody [in RTM and the colleges] knew he was a writer until they read about him in the papers. RACHAEL PHILIP wrote about him in New Straits Times (28 August 2005).
.
SWAGGERINGLY arrogant. Impudently bold. Undeniably talented. A number of remarks, both flattering and not, have been heaped onto this writer. Yet Uthaya Sankar SB, whose mind is constantly on work mode, spawning story ideas, seems to be a regular bloke; no mood swings and eccentricities that regularly surround an author.
.
1 How does he feel about being labelled arrogant? I mean, making references to oneself in one’s own books is asking for it, isn’t it? “Well, it’s reality and I exist. Where I can exist, I’ll be there,” he says, full of confidence. But seriously, how did the arrogance bit come about? “I think it happened when I was presenting a paper in (Universiti Sains ) in 1998. I said it was okay for me if only 10 people read my stories as long as they are a thinking crowd.” A reporter quoted him on that, and that’s how he got tagged such. [READ THE PAPER HERE]
.
2 How does he handle the thing they call “writer’s block”? “It surprises me when people tell me about it. When I want to sit and write, it just comes to me. We are constantly gathering information throughout life. People tell me ‘I don’t know how to start’. I don’t have that problem. People tell me ‘I don’t know how to create a conflict’. I don’t have that problem. I guess God just loves me more.” We both laugh for a good five minutes, his a kind of snotty one, mine rather nervous.
.
3 Uthaya speaks fluent Tamil, Bahasa and English. While he grew up reading books in Bahasa and English, Tamil was rarely spoken at home and even among friends. In fact, he picked it up later in life by catching the 5.30pm Tamil news on RTM followed by the 6.00pm news in Bahasa to make sure he understood it right. [He even wrote a Tamil poem for the school magazine!]So one can forgive him if he gets a little peeved when people refer to him as a Tamil writer. “I am not someone who writes in Tamil and I am not a Tamil. So either way I am not a Tamil writer.” Uthaya is Malayalee. [MORE HERE]
.
4 It may interest many that he was behind the 1999 BM controversy. Is it Bahasa Melayu or Bahasa ? He was told by Dewan Bahasa dan Pustaka that he should instead use Bahasa Melayu and not Bahasa in his books. Yes, our writer flipped over the matter. Not only did he decide to self-publish but every time “Bahasa ” appeared in his collection of short story (Sasterawan Pulau Cinta) it was capitalised. Such is his regard and love for the language. [Click HERE for an insight about the Bahasa Malaysia controversy.]
.
5 Uthaya stays away from writing novels, he confesses, because he is too forgetful. By the time the novel progresses into chapter four or five, he is quite sure he may forget the protagonist’s characteristics or even his full name! For that matter, Panchayat, a 145-page 18-chapter novel, has different characters giving their take on a particular event. “Therefore, if there are discrepancies in the narration, it’s not my fault. It’s the characters’ fault!” [Also: Hanuman]
. 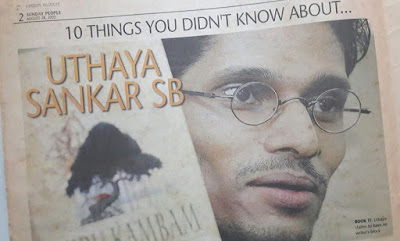 6 No eccentricities? Wait a minute. Some years back [1998], I spotted his car [Kancil] with his name and handphone number neatly printed in bold characters on it. Why? “So that people who know me but do not have my contacts can still reach me. Yes, it worked all the time.” But once or twice people called to ask if they could enrol in his driving school.
.
7 Before he dies, the last thing he would do would be to update his website. The blog, which he keeps updated on a regular basis, carries some of his articles and short stories while others are given synopsis.
.
8 His only bad habit is that he bites his nails. So do his daughter and son. Uthaya has tried to stop this habit but failed. Hence he feels he is in no position to correct his children. His son, however, is kind enough to advise his younger sister to bite but to be careful not to eat.
.
9 One thing he would gladly pass at the dinner table are vegetables. He has no love for even onions and bean sprout, ubiquitous in any decent plate of Maggi goreng, which he’d painstakingly remove from the dish. Kangkung and sawi, however, he can tolerate but not the rest.
.
10 What would he be if he’s not a writer? After a long, pause he replies “reader”. “I can’t imagine me being anything else but a writer.” The recognition he has received is evidence of his achievements. Hadiah Sastera Perdana , Hadiah Sastera Kumpulan Utusan-ExxonMobil 2003, Hadiah Cerpen Esso-Gapena 1996, etc speak volumes of his contribution to the industry.