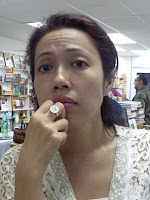 CONFIDENCE is an asset everyone strives to have. Yet it is not welcomed by others when they perceive someone as having that quality. After all, nobody likes a smart alec.
.

It was refreshing to meet Uthaya Sankar SB again after all these years. Oh, one has heard of his so-called high and mighty ways, and his backtalk. The truth is: the man is honestly blunt. But while he is assertive, he is very pleasant.

If truth be told, perhaps the snipers can’t take to him because they’re reminded of what they cannot accomplish. Uthaya has done what he set out to do when he was 15: to write better than the young adult writers he had been reading, and to write for a thinking public.

Quite hard to swallow, yes?

His works are meant for the thinking reader, and no, do not pigeonhole him as a writer for young adults. He is a writer. Full stop.

He was 15 when he decided to write a short story. After being deluged with young adult fiction that had protagonists entering jungles, meeting robbers, beating them up, being given brave teenagers award by the police he was fed up and thought there had to be something better than the rubbish he read.

And that began his passion for documenting life, creating new and yet familiar worlds that spoke to his readers. There were so many things happening, why concentrate on teenage romance and cops and robbers?

“Please allow me to make clear that I do not write in Tamil. My work has been translated into Tamil, but I have always written in Bahasa Malaysia. I speak Bahasa Malaysia at home and I write in it. I do speak Tamil, but only conversationally,” Uthaya announced.

His race has nothing to do with language. One can still be patriotic even if one writes in Swahili. Look at R.K. Narayan (Uthayas favourite writer); he wrote about Indian life in English!

“Whichever language a writer chooses to communicate his stories in, his main responsibility is to know that language. Language is spare and meant for the writer to create, mould and fix; there’s no back-up music and lighting to spark the writing up,” Uthaya stressed. And he’s very much Malaysian, thank you very much.

“Besides, as a nation and as individual citizen, we must realise that language can unite people. This issue (Bahasa Malaysia) has been an enigma for me. Here I am, promoting the use and love of the language and yet people want to politicise it. The 1969 riots; haven’t we learned anything from them? Bahasa Malaysia is important. Of course our mother tongues are important; our cultures make us what we are but we are a multiracial country, so one particular language is needed, as the face of a nation.

“When I was compiling an anthology of Bahasa Malaysia stories by Malaysian Indian writers in 1998, what an uproar it caused! I was told I could not use Bahasa Malaysa, because it was a political term to be used by politicians only.

Incidentally, Datuk Seri Najib Tun Razak, who was Education Minister then, was quoted in The Sun in 1999, supporting the term Bahasa Malaysia: “In a multiracial country, it is easier to accept Bahasa Malaysia since it reflects that the language belongs to the different races too.”

[Click HERE to read more about the Bahasa Malaysia controversy.]

Also in 1998, Uthaya’s experience in editing an anthology of Tamil stories to be translated into Bahasa Malaysia told him something else. He found that the stories submitted were not mature. They were basically grandmother stories, told because the stories were already there. But there was hardly any merit to them. It was done so people knew there were active Tamil writers. The title of the book is Seruling di Persimpangan.

As a writer, Uthaya admits that he is very much a loner. He does not take orders from anyone. “Nobody tells me to write about something. I decide on my own themes.”

When an idea is formed, it ferments in his mind. Once all the kinks and puzzles have been solved, he sits down and writes until it’s complete.

When the writing is done, he edits his works. After that, he critiques it. “Since I know the A to Z of my work, it’s best for me to do it. When we know our work, we can defend it,” he said.

Do people consider him the younger version of K.S. Maniam, Malaysia’s world-renowed novelist? Uthaya’s eyes popped. “Oo, no, I’m myself! I don’t want to be anyone else, I’m me! I’m just doing what I do best.”

Of the young writers, Uthaya observes that while they have knowledge, they have not really mastered the art of storytelling.

“At the end of the day, their stories sound like an encyclopedia. Where’s the story? I’m amazed by the depth of information I’m reading, but what’s it about? There’s so much to life, and in life, to write about! No story, macam mana?”

For this reason, he holds regular workshops for young aspiring writers.

“When I wanted to become a writer, I had no such bengkel. So I want to make sure that these people have a chance.

“I’d like to create writers who write in Bahasa Malaysia. When you write in it, you start loving the language and the literature. And literature is what makes humans human.”

Last question: is it true that you are as confident and arrogant as they say?

“Confident hmm, yes; arrogant, definitely!” He grins broadly before breaking up into laughter.

He’s a cheeky one, that Uthaya.