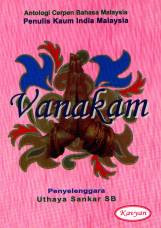 The Voice of Malaysian Indian Writers: The Struggle and the Achievement
..

History has been created. The very first compilation of Bahasa Malaysia short stories by Malaysian Indian writers was published in 2002.

Vanakam, the title of the compilation, is a very common Tamil language word. It means “Good day” – and can be used any time of the day, or night. Frankly speaking, the publicity for this book was started as early as 1998; that’s four years before the book was actually published.

Vanakam was the title of the compilation approved for publication – and later rejected – by Dewan Bahasa dan Pustaka (DBP) for the sole reason that Uthaya as the compiler used the term “Bahasa Malaysia” when refering to the language in which all 15 stories were written.

[Read all about the issue HERE]

Four years later, Uthaya self-published Vanakam with finance support from the writers involved in this project. Vanakam was published as part of Kavyan project. Finally the book is on the shelves and awaits reaction from readers.

As mentioned earlier, Uthaya started publicity for Vanakam nearly five years ago. He’d answer any phone call with a “vanakam”. And he still does. His cute Kancil used to carry a “Vanakam” sticker. later his black Perdana V6 paraded one.

Nowadays, “Vanakam” has become such a common word even among non-Tamil speaking Malaysian. So, finally, when Vanakam was published, everyone found the title familiar; and catchy.

For those who still have no idea what “vanakam” means, the blurb gives all the details – including how to express ‘vanakam’ with your hands.

Compiling the first Vanakam anthology in 1998 was an interesting experience, recalls Uthaya. Things got even more interesting once DBP decided to stop press once he did not approve to the idea of replacing the term “Bahasa Malaysia” with another term.

“And it was such a beautiful experience compiling the new Vanakam anthology which was published in 2002,” he admits. “Tiring, yes. But at the end of the day, the ten writers involved created history: our stories are now included in the very first anthology of Bahasa Malaysia short stories by Malaysian Indian writers. Something to be very proud of. An accomplishment for Kavyan!”

History should have been created in 1999, but no thanks to DBP, it took nearly four more years to make it a reality. Four of the writers involved in the 1998 Vanakam are also involved in the 2002 Vanakam. The other two opted out without any specific reason. Anyway, six new writers joined the project of publishing Vanakam in 2002.

All the stories in Vanakam revolve around Malaysian Indian characters: their culture, beliefs, religion, politics, problems etc. Selection was made in order to present an insight of the community to Bahasa Malaysia readers.

Do not expect stories about Indians suffering in rubber estates or in Tamil schools. No free propaganda for any Indian political leaders in this anthology. All the writers talk about more interesting – and more important – matters. Thankyouverymuch.

A wife in Sritharanee Subramaniam’s story wonders why her husband doesn’t want to become a father. Bathmavathi Krishnan takes a look into gangsterism and how love can make a difference in “I Love You, Raj”.

“Cat” by Uthaya Sankar SB is not only about gender bias but also about a cat (and his name is “Cat”) who wants to become the leader of the country. Meanwhile, Retna Devi Balan includes Indian music in her “Kamovarthini”.

If you are wondering why Indian girls are too shy when it comes to love, join Vijayaletchumy Vellasamy to help her character pour his love to a neighbour. Or you may find interest in M. Mahendran’s story about a Chinese girl brought up in an Indian family.

Domestic violence and issues of a good-for-nothing husband is portrayed by S. G. Prabhawathy while Saroja Theavy Balakrishnan talks about survival of Indians in the near future.

Raja Rajeswari Seetha Raman takes us on a flight to France and Ganesan Duraisamy blames parents regarding problematic teenagers.

Each and every story in Vanakam deals with a different issue – but they are all regarding Malaysian Indians today. Written in simple Bahasa Malaysia, Vanakam is an easy way for every Malaysian to understand Malayian Indians better.

Above all, Malaysian Indian writers have proven – with or without DBP’s consent, thankyouverymuch – that Indians in Malaysia not only love Bahasa Malaysia as a national language but are also able to master the language and express themselves through Bahasa Malaysia fiction.

And this happens to be just the beginning of the history. …